JoystickCursorTool is a small utility simulating keyboard keys using a joystick. It can be used for keyboardless navigation in browsers and file managers, playing games without native joystick support, using the joystick port for electronic interfaces without needing to write a joystick driver as well as other situations where only a small subset of the keyboard is typically used.

The tool supports all programs using the standard windows driver for keyboard input. It does not always work with programs retrieving keyboard data at a lower level like the Win9x DOS box.

After starting the program a small icon shows up in the task bar:

The tool switches to idle state automatically if the joystick is not connected or switched off. A left click on the icon will open the setup dialog, a double click will close it.

A standard setting is included, but you might also define your own. This allows using the remaining buttons as well as the other axes. After a right click the following options are available: 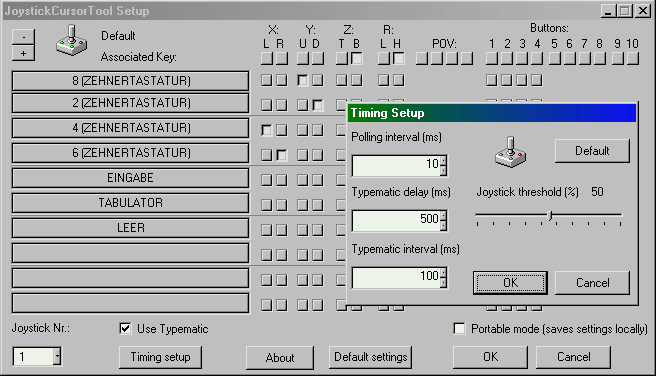 Assigning keys to the joystick

Key assignment is straightforward, although a bit unusual:

Repeat this sequence for every assignment you want to change.

You can enable a sequence of keys to an axis. Each key maps to a specific range on that axis and will be triggered whenever the axis position enters that range. This functionality is primarily intended for using rudders or knobs as a volume control or virtual gas pedal.

Whenever there is a joycur.cfg file in the program directory, the tool reads the settings out of this one rather than the system registry. This allows you to move the settings to a different computer or to store them in different locations by renaming or copying the file. In order to reuse it, just pass it on the command line or drag&drop it onto the tools program icon.